Sorghum popularly known as jowar is the most important food and fodder crop of dry land agriculture. The cereal crop is perennial in nature and possessing corn like leaves and bearing the grain in a compact cluster. Sorghum is the fifth most important cereal crop in the world after wheat, rice, maize and barley. It is found in the arid and semi arid parts of the world, due to its feature of being extremely drought tolerant. The nutritional value of sorghum is same as of that of corn and that is why it is gaining importance as livestock feed. Sorghum is also used for ethanol production, producing grain alcohol, starch production, production of adhesives and paper other than being used as food and feed.

Jowar is one of the major staple food grain crops in India. Out of the total area under jowar cultivation in India, 50% is cultivated in Maharashtra. Whereas out of the total production of Jowar in the nation, 52% is from Maharashtra. Karnataka, Andhra Pradesh, Tamil Nadu.
One more advantage of this crop is that it can be grown in both Kharif and Rabi season. Also, it can handle and grow on a wide range of soil types starting from fertile to less nutrient soils but an effective output largely depends on soil moisture, resistance and porosity.

Nuziveedu Seeds has realized that there is a wide scope to make the crop popular in dry farming areas and that this crop requires redesigning of agricultural strategy to improve the productivity of the crop by introducing new Hybrid seeds and improving input facilities. Nuziveedu Seeds, with intense R&D efforts has already produced some excellent products which are giving remarkable results. With the rich potential of Jowar, Nuziveedu Seeds is all set to deliver future product lines, in this ‘wonder crop’ and presently, Nuziveedu Seeds breeders are conducting trials with the main objectives of 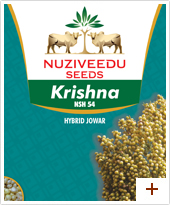 Some Key Facts of Jowar