Nuziveedu Seeds has thoroughly researched the needs of farmers and accordingly designs its products and services that prove to be highly beneficial for them. We are emphasizing on rural development in the dimensions – economic, educational, ecological and spiritual and thus making a positive impact on the welfare of the society.

The benefits of the following agronomic practices, which our scientist has perfected, after a rigorous trials and tests, have proved to be economically beneficial to our farmers.

After introduction of Bt, Cotton, the yield of cotton has increased and the farmer is realizing more profit per acre. Besides, cotton prices have also increased in the last 10 years. As a result farmers have realized getter price due to good quality of produce e.g. two of our products Bunny and Mallika helped the farmers to fetch good price for the long fibers. Hence farmers realized enhanced income. 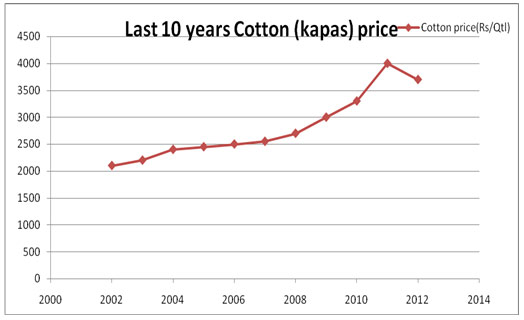 It is estimated that increased productivity due to superior hybrids and new technology in corn and cotton alone contributes to more than Rs. 30000 Crore additional income to farmers annually in rural India.

Providing Linkages to farmers for buy back of Produce-

Nuziveedu Seeds has built a farmer Integrated Model, a unique proposition, under which the company has set up a National cotton Corporation and a textile company through which it buys back produce of the farmers offering them a ready market for their produce. The quantity of Cotton purchased by Nuziveedu Seeds Textile has been around 9-10 lakh quintals of cotton helping farmers market their produce and reducing holding cost and wastages. Ven