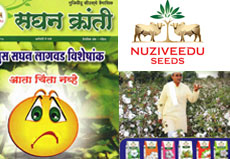 Nuziveedu Seeds has a robust and energetic marketing team who are working tirelessly to provide farmers with new seed technologies. The marketing network comprises of 9 Regional offices; 7 C&F agents; around 2400 distributors spread across 19 states in the country. This robust network is handled by our marketing team that has around 500 experienced professionals which constitute approximately 1/3rd of total manpower of the company. *.

Nuziveedu Seeds not only provides the best quality seeds to farmers but also provides them with additional services that are designed to benefit farmers significantly. This Nuziveedu Seeds marketing team also delivers a series of promotional campaigns and extension services to farmers. Pre-seasonal promotional activities include poster campaigns, jeep campaigns and farmer meetings to create product awareness. Post-seasonal promotional activities include crop shows and field days. These campaigns ensure that farmers are aware of the variety of seeds offered by Nuziveedu Seeds its products and so that they are optimally benefited by using these seeds.

Nuziveedu Seeds also conducts many educational programmes for the benefit of farmers under the project titled “SUBEEJ KRISHI VIGNAN”. Through this program, the marketing and extension teams reach out to farmers and educate them on latest developments in crop production technologies, crop agronomy, pest and diseases management, weed management and also post harvest management and market dynamics. These services are offered as a service to the farming community without any commercial objective.

Nuziveedu Seeds pro-actively participates in the Seed Subsidy Programs initiated by the State and Central Governments. Such initiatives driven by the company has helped millions of farmers to get high quality seeds at a lower price.

Nuziveedu Seeds has signed an MOU with Uttar Pradesh government under Private Public Partnership (PPP mode) for carrying out extension work in the state. Under this project Company is doing extension work in 25 districts in paddy and maize crops. The extension work involves, inter alia, Crop Demonstration, Farmers’ Trainings and Field Visits with the help of ATMA project coordinators. For kharif season 2011-12, the project has met the desired result successfully and the UP government has appreciated this partnership and extended the same upto 2017.

Maharashtra Govt. sanctioned the PPP project in 2012 to improve cotton productivity by 30% in Vidharba region covering around 10,000 acres. This project was also very successful with average increase in yield by 50% and in some cases it was even 100%. The same project is planned to be covered in 20,000 acres in this year

Similar proposals have been submitted for PPP in states of Karnataka, and Andhra Pradesh across different crops.

In case of any kind of delay, the farmer may not postpone the sowing of his crop and may choose an alternate product. In order to address this kind of a situation Nuziveedu Seeds plans ahead by creating sufficient capacity to process the seeds and keeps them ready for marketing. Buffer stocks are maintained to overcome unexpected shortages in production and an unexpected rise in demand. Nuziveedu Seeds also has the provision to absorb excess production that might arise due to certain favorable conditions.

Location of our Storage godowns in regional offices, C&F agents, Processing plant is shown in the below diagram.